Day zero - The train to Shipley.

So, pretty much straight from the frying pan that is the end of summer term in a primary school, into the cool, calm salad bowl that is my annual long distance hill wander. Lovely.....

My first impression of Shipley was of a hilly Ellesmere Port. In retrospect this was possibly a bit harsh. Shipley clearly has more than two attractive buildings, so must therefore be a nicer place. But it's close. Sort of attached to Shipley is Saltaire, and the contrast is ridiculous. Saltaire obviously has an important industrial heritage and the original mills and administrative buildings have been beautifully restored. It reminds me very much of Port Sunlight, plonked as that is in the middle of grotty Liverpool suburbs. 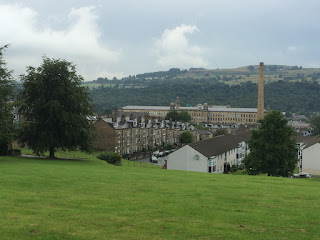 Sitting on the umbilical cord between the two places is my hotel, and it has the potential to veer in either direction tonight. Will it follow its very attractive and calm appearance and lean towards Saltaire? Or will it follow its stag / hen clientele and 24 hour bar and lean towards Shipley? Well I won't know till later, and for now I don't mind as I'm in the quite lovely Boathouse Inn in Saltaire, overlooking the sun-drenched (at last!) duckling filled river and eating venison casserole. Actually duckling filled sounds a bit odd, there is water in the river as well.

So why have I come all the way to England to walk? And why the Dales High Way? Well I've done 5 consecutive years in Wales so I thought I'd spread my wings to the country of my birth, and last year my friend Fatman (aka. Mike) mentioned this newly waymarked path. I'd already done the original Dales (Low) Way with another friend Jon years back and fancied the increased challenge. It's a bit short though so I've decided to add a day of the Pennine Way and two further days to take me up to Hadrian's Wall, a decent place to finish.

It ought to be a considerably easier walk than last year's epic, but after doing my back in earlier in the week I'm a bit edgy about it giving in on me, despite the all clear from my osteopath this morning. Apart from that I'm not carrying any other injuries (yet), so hopefully all will be ok. My only other aim is to cut down the size of these blog entries compared to previous years, which were interminable at times.

Oh dear, true to form the excitement has already started. On the table next to me a father and his young son were playing 1,2,3,COWBOY! The winner seemed to be the first to draw a pretend gun and shoot the other on the word 'cowboy'. After several minutes of this the boy took Dad by surprise by changing the game to 1,2,3,NINJA and hitting him quite hard in the throat with his arm. Dad made several strange, strangled noises and they left soon after.

Well I'll have a couple more pints here as the view is so lovely, then head back to the hotel. 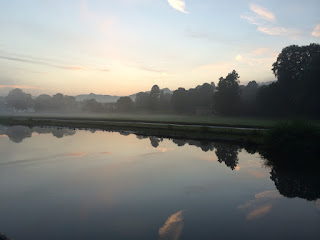 Tomorrow is quite a long first day at almost 18 miles, and I could do with it being less humid than the last couple of days. The aforementioned Fatman is meeting me in Ilkley to walk two thirds of the day with me to Skipton, then tomorrow night I'm staying at his house, and no doubt going out for a Sunday curry.